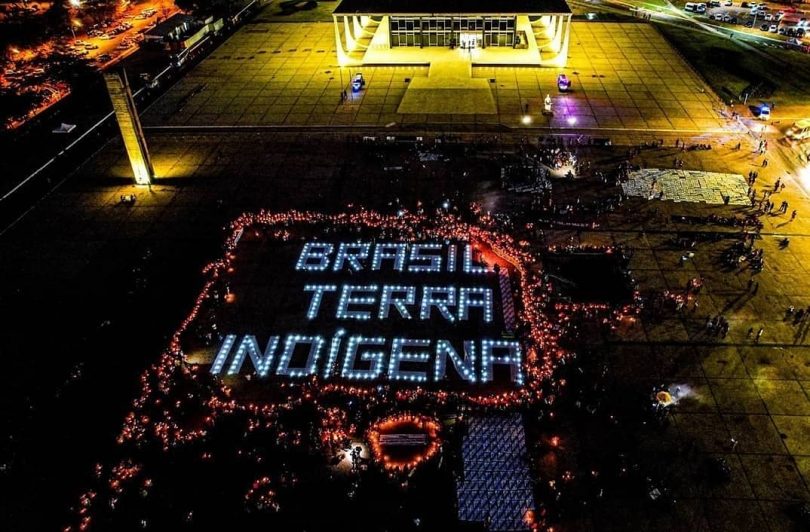 The Brazilian Supreme Court is judging today (August 26th) a case that will define the future of the Indigenous Lands in Brazil. Around 6 thousand Indigenous Peoples from over 170 Nations from all around the country are mobilized in the capital, Brasilia, against an overly narrow and distorted interpretation of indigenous rights which would only recognize lands physically occupied by native communities at the time Brazil’s constitution was ratified in 1988.

This has been the largest indigenous mobilization since the 1988 Constitution.

What is the High Court judging today?

The Court will analyze an appeal filed by the government of Santa Catarina state against the Xokleng people concerning the Ibirama-Laklãnõ Indigenous Territory, which is also home to the Guarani and Kaingang peoples. The government’s suit is based on the interpretation of only recognizing Indigenous rights over lands occupied by native communities when the Constitution was ratified in 1988.

The Xokleng were almost expelled from their traditional hunting grounds over a century ago to make room for European settlers, mostly Germans fleeing economic and political turmoil. At one point, the state rewarded the killing of indigenous people, and mercenaries collected the ears of dead natives – a painful moment in the country’s past, which has been documented by anthropologists and passed down between generations.

With the status of “general repercussion”, the decision taken now will serve as a guideline for the federal management and all instances of Justice as well as administrative and legislative projects concerning reservation procedures of Indigenous lands.

What is the legal thesis against the Indigenous Peoples?

This is a judicial thesis created by ruralists, or the big agriculture lobby, to alter the rules for the preservation of Indigenous Lands in Brazil. The thesis considers Indigenous Lands only those in possession of Indigenous Peoples on the date of the promulgation of the 1988 Constitution. The theme is under discussion in the Federal Supreme Court and in Congress, where it is being processed through the proposed bill PL 490.

According to the thesis, the Indigenous Peoples who do not prove possession of their lands by the date the Constitution was enacted, have definitively lost the right to claim their ancestral lands.

What does the Brazilian Constitution say?

The current interpretation of what the Constitution says on this point indicates there is no need for Indigenous Peoples to prove the date of possession of their lands since they are First Nations, that is, they were already here when the Portuguese colonizers arrived in 1500.

Why is the proposed thesis unjust?

The thesis is unfair because it disregards the expulsions, forced removals, and all the violence suffered by Indigenous Peoples up until the enacting of the Constitution. Furthermore, it ignores the fact that, until 1988, the Indigenous Peoples of Brazil were under the guardianship of the State, and could not go to court independently to fight for their rights.

What does the current draft law PL 490 propose?

The return of PL 490 to the Chamber’s agenda is an attempt to impose on Indigenous Peoples the joint interests of leaders allied with the Bolsonaro government, ruralists, and fundamentalist evangelicals.

It defends the thesis presented today and also prohibits the expansion of lands that have already protected status, as well as allows for the exploitation of Indigenous Lands by miners.

The bill also makes contact with Isolated People more flexible. In Brazil, there are 115 records of these groups, 28 of them confirmed. The search for contact with isolated Indigenous Peoples by Christian missionaries has already produced mass mortality in recent Brazilian history.

How to support Brazilian Indigenous Peoples?

The full schedule of the Fight for Life campaign can be accessed here.

Follow The Articulation of Indigenous Peoples of Brazil – APIB on social media: